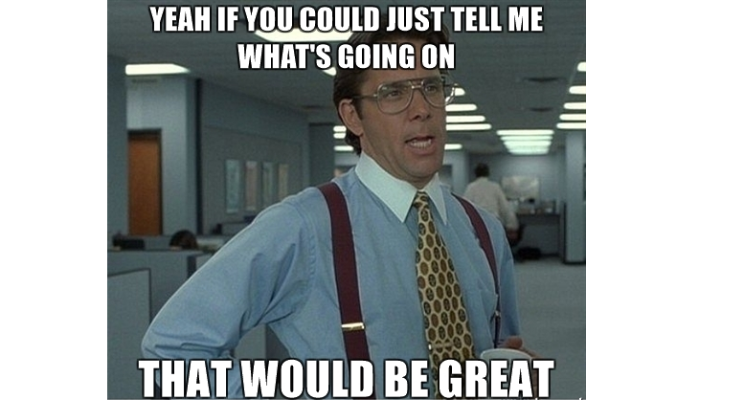 What Are Leaders Afraid Of?

In the past number of months, we’ve been focusing time with many clients on one of our newest Acuity products: the Engagement Indicator. The Engagement Indicator is a survey that asks employees a series of questions that have been proven to measure the core elements needed to attract, focus, and retain an organization’s most talented employees and drive results. Organizations receive detailed reporting and the results for each organization are fascinating.

Why is this? Low scores could be the result of two scenarios (or a mix of both).

Given the general competence and capabilities of many of the leaders we’ve done Engagement Indicator surveys with, we often find #2 to be true.

Leaders are dealing with issues, but people aren’t necessarily aware of it because it hasn’t been communicated effectively. For some reason, leaders are afraid to over-communicate!

When resolving a problem, communication should take place throughout until resolution. When an issue has been brought to your attention as a Leader, thank the employee for letting you know and let them know that you’ll take care of it by X date. When resolving an operational problem, as much as possible ask for your team’s input. They may have some great ideas and may be able to resolve it with you! Take action and ensure that the problem is resolved. Depending on the complexity of the issue, you may communicate throughout the resolution process to let them know that you’re still working on it. When resolution has occurred let that employee know that you’ve resolved the issue.

If it’s impossible to make a change or fully resolve the issue, let the employee know WHY. At least they’ll understand and be appreciative of your attempt to resolve the situation, rather than being frustrated you’re your lack of action or questioning your capability.

When dealing with people/team problems it may not always be appropriate to share the details of the issue or resolution. You don’t want to be discussing an employee’s personal problem with their co-workers. However, you should still communicate. Thank the employee who brought up the issue, let them know you will deal with it and once the issue has been resolved, tell them. You don’t need to give them the details about how, why or what, but at least they’ll know the issue has been addressed!

Why is it important to communicate when dealing with a problem or issue?

As a leader, it’s your job to deal with problems and remove roadblocks. By being transparent with your team and communicating throughout your resolution process you are taking away some of their uncertainty. Rather than worrying about a problem, they can put their effort and energy into their jobs.

Don’t be afraid to over-communicate.  You may feel as though you are providing too much information or communicating too frequently but your team will appreciate the transparency.

Build credibility with your team by dealing with (and communicating about) operational and people issues quickly, so they can get back to performing effectively in their roles!

Visit our website or sign up for our newsletter for information about Acuity and the HR support we can provide.